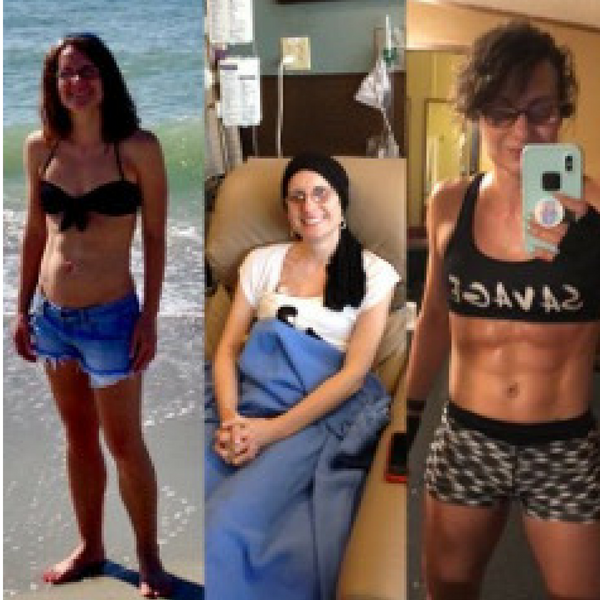 I’ve been into fitness I (well, I’ve exercised) since I was 15-years old, but my true journey didn’t begin until much later. The thing is, I’ve never really had a significant amount of weight to lose, although, in my previously disordered mindset, I didn’t see it that way…

When I was younger, I struggled with self-esteem. I had a really negative self-image, something I partly attribute to being born visually impaired (I was born with congenital cataracts and Microphthalmia, and I later developed Glaucoma). It wasn’t that big of a deal when I was really young, but as a teenager, I felt “different”. I wore thick-lensed glasses and I was unable to drive due to low vision. Looking back now, those things really aren’t that big of a deal, but like all teens, I just wanted to fit into one standard mold.

Things kind of spiraled downward, and I developed body dysmorphia. I convinced myself that I was “fat”, and I ended up in a one on one battle with bulimia during my junior and senior years of high school. It was my own twisted way of trying to take control, even though I was nowhere near “in control”.

Fortunately, with the help of my mom and my now husband, I was able to overcome that awful affliction, but I still didn’t like myself very much (self-love is so hard to grasp sometimes). Although I continued exercising (a habit that I continue to this day), I was still doing it for all the wrong reasons. It certainly wasn’t in the pursuit of health. Truthfully, I was doing it to burn calories, so I could stay “skinny”.

At that time, I didn’t know anything about nutrition, optimal health & wellness, or “true” fitness…My mindset was so off. …I was still a total wreck!

In 2006 my son was born. Things started to change a little, because I had someone more important than me to worry about. He was born with the same eye condition as me, so the first year of his life was filled with surgeries and doctors appointments. Although I focused most of my attention on him, I was still working out pretty much daily (mostly cardio). Also, I had learned about Calories from a magazine article, and I started restricting them because I thought that’s what you had to do to acquire the “perfect” body – exercise as much as you could and eat as little as possible.

I ate whatever I wanted, but I wouldn’t allow myself more than 1200 Calories a day, and I would try to aim for less, if possible. I didn’t know anything about macronutrients, resting metabolic rate, daily calorie expenditure, or structured training programs. Weightlifting had certainly never crossed my mind, at this point. I was just moving from one day to the next, taking care of my son, trying to avoid any type of weight gain, and freaking out if the scale went up.

This cycle actually continued for several years. Then, in 2014, I got sick, REALLY sick. After a year of excruciating joint pain, weakness, high fevers, chills, night sweats, extreme weight loss, anemia, tests, 2 blood transfusions, and misdiagnosis after misdiagnosis, I was finally, and correctly, diagnosed with stage 4 Hodgkin’s Lymphoma in May of 2015. I underwent 6 months of chemo followed by 4 straight weeks of radiation. Thanks to my amazing family/support system, a wonderful team of doctors, nurses, technicians, and volunteers, as well as my refusal to give in, I beat my cancer! (Going on 3 years in remission, this year!)

Once I was cancer-free, I decided that I was going to take control of my health. I started learning all I could about living a healthy lifestyle. I learned about strength training and structured workout routines. I also learned about the importance of proper nutrition, as well as various nutrition strategies. I started lifting weights because I wanted to build muscle. I began putting together my own at-home workouts, combining both strength and cardio. Eventually, I began separating my workouts and training on a split schedule. I learned to change things up ever so often, and my workout regimen quickly became routine.

Finally, my workouts had a purpose, and I was starting to see results. All the training I do, I do from home. To this day, I’ve never actually worked out in a gym. On top of improving the quality of my physical activity, I started improving my eating habits. I began eating to nourish and fuel my body. I no longer felt the need to restrict or even count every Calorie. I no longer labeled foods as “good” or “bad”. I had learned about macronutrients and how to properly determine, use, and track them, and I did so for a while. I also stopped using the scale to determine how I felt about myself.

Probably one of my most victorious moments to date was the day I kicked my scale under the bed and never looked back. Finally, I was grasping the concepts of optimal health and “true” fitness.

To me, the day my health started to matter is the day my true journey began. In February of 2016, I was researching protein powders online, because I was looking to up my protein intake to optimize muscle gain when I came across IdealFit. On a whim, I ordered a tub of Chocolate Brownie and a tub French Vanilla IdealLean Protein, and I’ve been hooked ever since! Today, my stack consists of pre-workout, BCAAs, Whey Isolate, and creatine, not to mention vitamins and a nightly probiotic. I love my supplements, and I’ve noticed a huge difference in my overall performance and muscle composition since I started using them.

Of course, I only use them to fill in the gaps, as there is no substitute for a balanced diet, and I do love food! In fact, some of my favorite things include tacos de lengua, scrambled eggs with chorizo and spinach in low carb tortillas with full-fat Greek yogurt, sweet potato anything, homemade tamales, pulled BBQ pork, apple with cottage cheese and almonds, KIND granola bars…coffee…Unless training for a competition or professional sport, I believe the best approach to nutrition is balance. 80/20 is the way to go!

After I discovered IdealFit, I found the group IdealFit Women, and I fell in love with it! I started connecting and interacting with likeminded women, sharing successes, getting and giving advice, celebrating milestones and victories, motivating and encouraging others, but most importantly, being motivated and encouraged by others. Everyone in the group was so inspiring that in 2017 I decided to get my personal trainer certification. I wanted to be able to help others achieve their goals. I know how hard it is trying to figure out all this fitness stuff, and I want everyone to know they aren’t alone in their struggles.

When a person is just starting out, I always tell them: Believe in yourself. Know that you CAN! It doesn’t matter where you’re at physically; realistic goals are always attainable. Find workouts that you enjoy. Be adventurous. Try new things. If there’s an exercise you absolutely hate, don’t do it! The same goes for nutrition. Eat wholesome, nourishing foods that fuel you and that you actually like. Don’t restrict or deprive your body of the nutrients/energy it needs, and never feel guilty for indulging in something you love. It’s all about balance. Drink more water, eat more vegetables, small daily changes add up! Be patient with yourself. True change takes time. You don’t have to be 110% on point all the time. You just have to put forth genuine effort. Don’t focus on how much work you still have to do, appreciate how far you’ve come.

Remember, it’s never too late to start, but it’s always too early to quit…It always makes me so happy when I can inspire someone to take that first step towards a healthier, happier life! Looking back, it’s been a heck of a journey, but today I’m the healthiest, happiest, and fittest (physically, mentally, spiritually, and emotionally) that I’ve ever been.

Ultimately, I’m proud of how far I’ve come, and I can’t wait to see what the future holds!
*These women may or may not be actual users of IdealFit products. We simply want to share their story.